★ Bearded Dragons - The Essential Guide ★ Get It Now 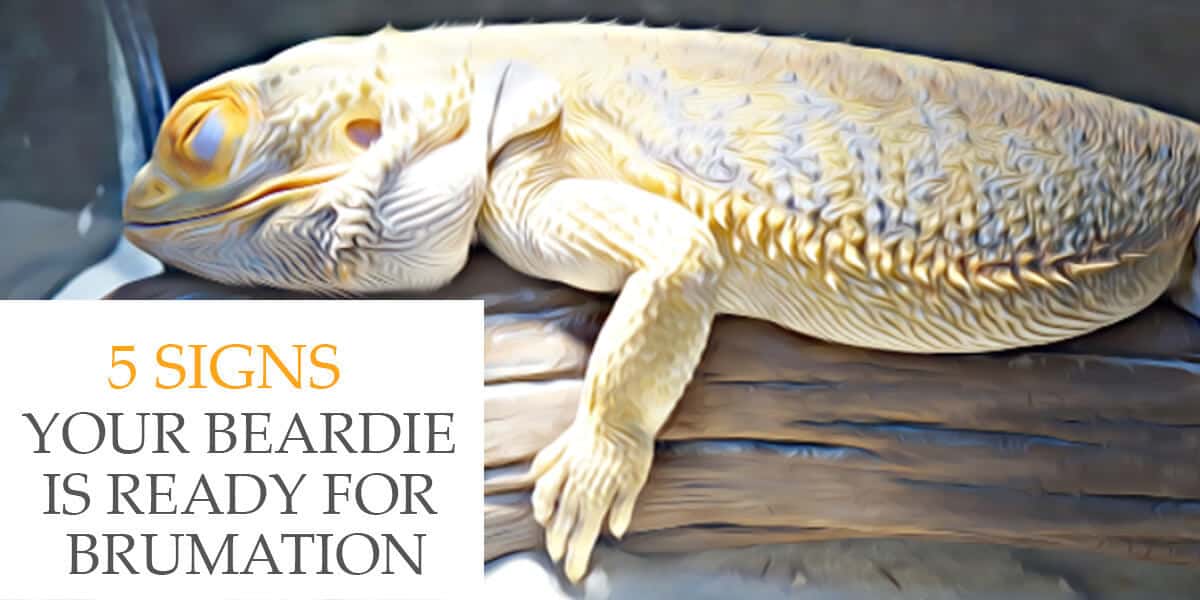 Bearded dragon brumation is similar to hibernation for mammals where your bearded dragon will go through a period of dormancy and dramatically reduced activity.

You will typically see this happen in bearded dragons that are at least 12 months of age but it’s also quite common for them to go into this cycle at an earlier age.

​Why Do Bearded Dragons Go Into Brumation?

This is a natural process that helps with survival and also replication.

During the colder months (winter) there are a lot fewer insects around and the plants that bearded dragons normally eat have gone dormant so in order to survive both the cold and food shortage bearded dragons brumate until the warm weather and the food returns typically in spring.

It is also linked to their mating cycles, during their brumation, the male’s sperm will dramatically increase and the females will ovulate. When they come out brumation they will instinctively look for a mate.

How Long Does Brumation Last?

In the wild bearded dragons will brumate for most of the winter and come out for spring once the temperatures begin to warm up.

In captivity, this period can last a few weeks or a few months (I’ve read cases where owners have had dragons hit nearly 6 months!).

Since they will be living inside a stable environment with a constant supply of food and stable temperatures don’t expect your beardie to follow the same brumation cycle as their native cousins in the outback, that is, falling into brumation during winter they could, in fact, enter brumation at any stage.

Most beardies will start to brumate once they hit the 12-month mark but I have heard of cases where 6-month-olds have gone into brumation and worked through their cycle without any problems.

The reason why vets typically don’t like dragons going under too young is that they may not have the energy body reserves to handle 3 months.

Can You Stop Brumation From Happening?

Once their instinct to brumate kicks in there really is little you can do so it’s best to let it happen and make all of the necessary preparations.

I do know of owners who shorten the brumation period by slowly upping the temps inside the tank but my advice is to relax and let your guy or gal do what they are supposed to do.

It’s Summer, So Why Is My Beard Dragon Is In Brumation?

Is this a thing?

Let me explain why.

In the wild, a bearded dragon would brumate during the coolers seasons but as we’ve adopted them as pets and created a safe and stable environment there are two reasons why they would still slow down which are:

They originate from Australia (the southern hemisphere) where the seasons are the exact opposite to the northern hemisphere which means when it’s summer in the U.S. it’s actually winter over here in Australia.

Through millions of years of evolution, I would imagine that the Australian seasonal cycle has been stamped into their DNA.

Bearded Dragons Will Brumate In Any Season

Since your beardie’s current conditions are so stable i.e. the temperature rarely fluctuates (no perceivable seasonal changes), food is plentiful, no predators, etc.

Logically, there is no need for them to brumate.

Still, their instinct is in the driver’s seat and this may mean that they will go into brumation regardless of the actual season they are currently in this is actually quite common.

5 Classic Signs That Your Beardie Is Gearing Up For Brumation

Bearded dragons won’t go into brumation until they’re about a year old so we have a year’s worth of experience dealing with the same dragon day and day out so when all of a sudden there behavior changes this can be alarming.

Just keep in mind that this will happen once they hit around 1 year of age and will be an annual cycle so be cool.

Here are a few signs that tell you that your bearded dragon is preparing for brumation:

A bearded dragon’s behavior may change and as a result, become agitated easily. While it is unlikely that they’ll get nasty and bite you it’s best to just leave them alone and reduce the amount of time you spend handling them.

During this period they really do just want to be left alone, that said, each bearded dragon is different so read the body language while you’re near or handling them.

2: Little to no interest in food

During the winter period, the earth is tilted away from the sun.

This means there are fewer UVB rays and heat which is necessary to help dragons digest their food.

Even if food was abundant, eating would cause problems like not being able to pull the nutrition from their food and potential impaction (constipation) which could kill them.

Don’t be alarmed if your bearded dragon refuses food even if they have not eaten for a while, I’ve spoken with owners whose dragons have not eaten during the entire cycle.

Make food available but let them decide if they can eat or not.

You will notice that your bearded dragon’s activity level will be dramatically reduced, they will sleep a lot and refuse to get under the basking light this is because they’re trying to cool down.

In Australia, it’s normal for bearded dragons to dig a hole where it’s nice and cool so if you are using a loose-particle substrate (sand, crushed walnuts, hulled millet, etc.) then you may notice them digging to get to somewhere cooler.

4: Spending most of their time in cool areas

If you notice your bearded dragon spending a lot of time in the coolest parts of the tank and in their hide as opposed to their basking spot then this is another good sign.

Since your bearded dragon’s eating has slowed down, naturally their poop schedule will follow, this is natural and not related to impaction.

4 Tips For A Healthy Brumation

Now that you know the signs to look for, it’s time to ensure that the brumation cycle is as stress-free as possible.

The best way to have a healthy dragon at the end of this cycle is to make sure that they go into brumation in top health.

Let’s dive into the tips!

The reason for this is that you want to remove any potential issues that could make your beardie sick or even kill them while they’re in brumation.

Take this sample to the vet so they can examine it for parasites.

Parasites can eat through your dragon and cause them to get very skinny which of course opens them up to more serious health issues.

3: Make sure you have a hide/dark spot

If you currently do not have a hide then I definitely recommend getting one even if it’s just an old box, flip it upside down and cut the front out out so they can get in and out without problems.

This gives them refuge from the light and also makes them feel safe.

Bearded dragons can often times come out of hibernation incredibly wrinkly and dehydrated so always keep a fresh bowl of water at their disposal.

A good way to tell if your dragon is dehydrated is by doing the pinch test, just pinch his skin and if it stays in the pinched position then they need some fluid.

5 Ways To Care For Your Beardie During The Brumation Period

So now that your beardie has entered into brumation how do we care for them?

In the wild, dragons will burrow into the dirt and also cover up the opening (to keep predators away) so they are perfectly fine with little to no light just reduce it slowly over a couple of weeks.

If you’d like to keep the lights on, that’s perfectly fine also simply reduce the light to 7-9 hours per day this could be from 12pm to 9pm for example but make sure that they have a cave that they can sleep inside of to get away from the light.

Always make water available during this time and you can also try placing them into a warm bath once per week for 10-15 minutes, keep it no deeper than 1-2 inches.

Make sure you keep an eye on them at all times, beardies can go to sleep in the bath so you want to make sure you can keep their head up so fluid doesn’t enter into their lungs (causing pneumonia) and to prevent drowning.

After the bath dry them off properly before placing them back into their tank.

Keep food available but don’t force feed them, no matter how little they are eating. Ideally, you don’t want them eating too much anyway as the food can go rotten inside of them since they won’t be pooping as often.

Try to keep physical contact to a minimum, in fact, it’s best to leave them alone to go through the cycle.

The only time you would handle them is to give them a bath to re-hydrate them.

Bearded dragons have evolved to slow their metabolic processes down to almost seeming “dead” you should still notice them breathing, however!

During this state they require little to no food and their activity level will be minimal which is why dragon owners have a hard time knowing whether their dragon is in brumation or dying.

If they have been cleared for parasites and other nasties then during their brumation cycle they will typically only lose a couple of grams of weight.

If you didn’t take them to the vet then watch their weight closely, rapid weight loss is a sure sign of parasites.

What To Expect After Brumation

When your beardie finally does come out of hibernation it’s best to let them slowly come back to normal.

Don’t start handling them like you normally do give them a few days to maybe a week or two as they will be more aggressive during this time.

The reason for this is that the brumation period spikes their hormone levels and they are ready to mate so you may see more confident posturing behaviors like black-bearding, head bobbing, etc.

Remember that your beardie has been partially asleep for a few months so it’s quite common for them to display a bit of grogginess after coming out of brumation so give them a few days to get back to normal.

Don’t force feed them or try to rush them to get back to normal just give them time to fully come out all on their own.

Once your beardie comes out, give them as much food as they will take while making sure that you dust the food in calcium.

Slowly return the lighting each day until you get back to 10-12 hours of light and your heating a couple of degrees every day until your tank returns to normal levels.

This is one of the other cool things about this animal that makes them so amazing and different to your typical pets.

Having a pet that “hibernates” can be especially hard for new owners to deal with especially when you consider that up until the brumation cycle they would have spent many months bonding and settling into a sold and consistent routine and now it feels like you’re dealing with a completely different animal.

My best advice is to understand and prepare for when this does happen so that you can adapt faster and let nature take it’ course.

I assure you that once they come out and have shaken off the post-sleep grogginess you’ll have your dragon back to normal and with brighter colors!

Each beardie is different, some will go down and will sleep through most of their brumation period, some will go into a cycle of light periodic sleep and everything in between.

Learn the natural brumation patterns of your dragon so you know what their “normal” looks like and let them go down naturally.